Is Stand Alone Critical Illness Cover Worth It?

Every year half a million women across the UK are diagnosed with breast cancer. 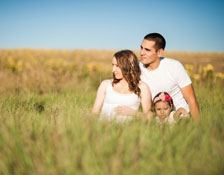 The same illness affects men too and it’s estimated that around 400 males who are diagnosed with breast cancer each year.

This is only one of many conditions that critical illness plans are available for to ease the financial worries that follow the emotionally charged diagnosis.

Thankfully, awareness has risen over the years which has led to many cases being diagnosed early, resulting in faster treatments and a much higher survival rate than ever before. That’s the good news.

The bad news is that for those who are diagnosed with any type of critical illness, the financial ramifications will lead to higher stress levels and money woes, which can impact recovery time. It’ll also affect the quality of life if you can’t afford home adaptations or your mortgage payments if you need to stay off work beyond what’s covered by your employer’s statutory sick pay (SSP).

The most prominent you’ll get cover for are heart attacks, strokes and cancer. With each policy, the list of illnesses covered will be accompanied by a definition. You can see an example of that on Legal and General’s “What’s Covered” page here. However, keep in mind that as it is a dynamically developing industry, it’s worth being up-to-date with all the latest life insurance news.

One to note from the definitions on that page is the definition of cancer, which states “excluding less advanced cases”. What that translates to is that they don’t cover early stage cancer, which as we already mentioned, the earlier you’re diagnosed, the higher your chance of survival.

Zurich though, do cover Cancer in Situ. Zurich’s guide to cover states – “… an early stage cancer that has stayed in the same place from where it began and has not spread to neighbouring tissue or organs”.

Every provider has different policies on what they cover as critical. What’s notable though is that not all will pay the sum agreed as there are policies that provide a partial payment for early diagnosis.

In all cases of critical illness cover paying out – the cover ends. These are one time policies meaning once they’ve paid out, they are over. You can’t pay to continue the policy once it’s been claimed.

Our advice is to look for a plan that covers no less than forty illnesses that the insurer classifies as critical. Any lower and you’ll likely find a better plan elsewhere. Always pay attention to the details though because not every insurer will cover an early diagnosis if they believe or can prove via medical research statistics that your early diagnosis gives you a high probability of survival, and therefore, categorise your illness as non-life threatening.

What else can you get included?

You shouldn’t settle for the plan with the most illnesses covered, full or partial payments for early diagnosis and certainly never for the cheapest you can find.

When you shop around, you’ll soon find that the insurance markets are pretty competitive, which swings things in your favour.

There are critical illness policies that give added value, some of which can include:

This is also an ideal policy for those who don’t have dependents. Life insurance is ideal for every family but for someone single with nobody dependent on them financially, a life insurance policy may not be a priority, however, with critical illness cover, it ensures that whatever financial commitments you have, can be met in the event you’re unable to work due to a long-term illness being diagnosed.

With many life insurance policies, there’s an option to add critical illness cover to your policy at an additional cost. Life insurance will only pay out upon the death of the policyholder regardless whether there’s a diagnosis of a terminal illness beforehand.

For the sole breadwinners of the household, the additional cover may be worth the financial outlay because if you were to lose the main income, state benefits may not provide enough money for you to meet the financial obligations required. If you feel that if you were unable to work for a prolonged period of time, or indefinitely, which may require you to sell your home, other material possessions, downsize or anything to get by, it’d be worth considering adding critical illness to your life insurance policy.

Your employer covers your Statutory Sick Pay for the first 28 weeks and that is taxable income. Lump sum pay outs from insurance policies are tax-free. After the 28 weeks, it’ll be state benefits, which often leaves people worse off financially.

If you were to be off work for six months plus, what sort of pressure would your household finances face?

Gone are the Dark Days of Critical Illness Cover

Many people know they could be doing with this level of protection but feel wary because this cover has been associated with bad press.

A while back, Critical Illness plans were notorious because they covered a lot less illnesses and the firms selling them were secretive about the success rates of claims processed. These days, there are more illnesses included in the plans, and the Association of British Insurers report the statistics of insurance claims processed, and the amount that are unsuccessful.

The table below shows the total statistics for 2015 insurance claims… 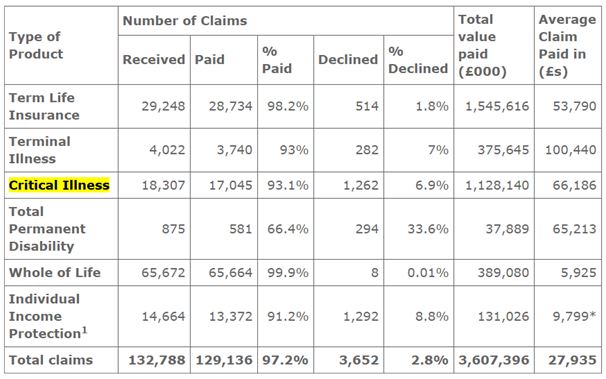 As you can see from that, 93.1% of claims are paid successfully. When a claim is made unsuccessfully, it’s usually due to the illness not being covered in the policy, or by what insurers refer to as non-disclosure, which is when they feel they issued cover to someone who hasn’t disclosed pertinent information during the application process.

So always be honest about any conditions you’ve had in the past, and most certainly disclose anything that’s required ongoing treatment as it can affect your claim.