Everyone needs to be protected financially. An LGBTQ-friendly advisor is a good place to start. 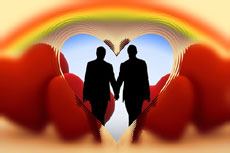 Someone who understands the industry and won’t let any prejudice of lifestyle stand in the way of providing you good terms, policies with fewer exclusions and at the same price as any heterosexual person or couples for joint policy applications in the case of Civil Partnerships.

The days of denying applications citing “no legal financial jurisdiction” because of sexual orientation or lifestyle are over!

Life insurance provides a level of cover tailored to what you need, and it’s no different for the LGBTQ community than it is for anyone else. The only difference is that you need to navigate the insurance market with precision so you can spot the good deals from the not so good.

You want to get more inclusions than there are exclusions, which are typically aplenty with insurance products.

Discrimination isn’t supposed to happen. It can though. And in certain situations, the law allows it.

Equality is your legal right. The Equality Act 2010 grants you that. It also grants an exception clause to insurers though.

The Equality Act 2010 provides equal rights for nine groups of people with the following characteristics. These are called “Protected Characteristics”.

For goods and services, insurance firms are exempt from discriminating against particular groups of people with a Protected Characteristic under Regulation 27 of The Equality Act (Sexual Orientation) Regulations 2007.

The exemption applies to (in specific circumstances) the following Protected Characteristics:

There are no exemptions to:

That last part is the saving grace for buying LGBTQ life insurance. Despite the insurance policy being called LGBTQ, it is by no means meant to imply that it’s any different from any other insurance product. It’s only indicative that the insurer selling the policy understands the particular needs of those of the LGBT community.

To distinctly sell the policy as LGBTQ life insurance would by its nature be discriminatory as it would separate it from the whole-of-market products. Life insurance is life insurance. It is a whole of market product because of the Equality Act 2010, however, some insurers are going to be more understanding of your needs. Others will only follow best practice guidelines from the ABI (Association of British Insurers) translating to you receiving advice from a financial advisor who is reading out of a textbook.

Not the best way to go about financial planning and protecting your future and that of your loved ones. Wouldn’t you agree? For sure!

Instead of approaching mass-market insurance firms, it’s more advisable to seek out a financial advisor with a speciality in equality or a firm with an appointed advisor specifically for addressing the needs of Gay men, MSM (men who have sex with men), Lesbian women, Trans people, Bisexual and Alternative Family (same-sex couples with a family) experts.

Since 2009, HIV Life Assurance products have been available. HIV is treated the same as any other pre-existing medical condition. The only questions the insurance firm can ask are those that are relevant to assessing your level of risk. That’s the only job of insurers, to assess your risk level and to do that without prejudice.

You cannot be categorised as high risk because you’re part of a same-sex couple. You can be asked if you’ve been tested for HIV, are awaiting results, or have contracted a Sexually Transmitted Disease in the past five years, the same questions that can be asked of a heterosexual person. You cannot be treated any differently. If you have been tested, you don’t need to disclose negative results. You do need to disclose a positive result.

If you are HIV positive, it’s likely you’d need a specialist insurance provider. That’s the same for any number of pre-existing medical conditions. Some insurers completely refuse to issue policies covering existing illnesses. That doesn’t mean they’re discriminating though as you wouldn’t be treated any less favourably than someone who didn’t have a Protected Characteristic. The insurer would treat everyone with any existing illness the same and refuse cover.

Protecting You from Financial Discrimination

Financial discrimination can happen if an insurer quotes you a higher price without justification. You cannot be refused a product or a service because of a Protected Characteristic, nor can you receive worse quality of service because of a Protected Characteristic. It’s all about equality, treating everyone as individuals, recognising and responding to differences (diversity) in a positive way.

There isn’t so much a specialist insurance firm specific to the LGBTQ community. There are a lot of groups who offer advice or act as an intermediary with advisors from financial institutions to help in tailoring the products to your exact needs.

For same-sex couples, it makes financial sense to review your financial protection at the early stages of family planning. 19 years is the advised term to plan for. How much cover you need would be based on how much debt you owe – at the minimum. This is the same for any family to ensure that in the event the worst happens, there is financial protection in place for your family.

It is advised that for those who are either adopting or planning to start a family that financial advice is sought with regards to the amount, level and type of life cover you’d need. A solicitor specialising in equality law would be best placed to assist with other forms of financial protection such as making a Will.

Statistics from Santander indicate that cohabiting same-sex couples increased by 68% from 2003 to 2013.  6% had dependent children living at home.

Prior to the Civil Partnership Act 2004, it wasn’t possible for same-sex couples to plan for inheritance tax using life insurance. With a Civil Partnership or Civil Marriage, Wills can be made, and spouses named the beneficiaries making forward tax planning possible… up to the value determined by the HMRC. The Estate includes all money, property and assets.

Co-habiting same-sex couples should seek financial advice on life insurance to ensure the value of the policy covers all outstanding debt and the potential inheritance tax bill.

How Can I Tell if an Insurance Firm is LGBT-Friendly?

It’s tricky but it can be done. One of the more recent ways is to observe the application process of applying for a quote online. The title Mx is used by trans people – those who don’t identify as male or female.

The majority of applications have standard titles:

LGBTQ-Friendly processes have the additional title of Mx available. It’s an indication that they at least recognise that not everyone is male or female. Recognition is a good starting point.

The government, Royal Mail, the NHS and many other organisations have begun to officially recognise and quietly roll out the use and recognition of the Mx title. It’s just not been wildly reported in the media so there’s been no fanfare to let people know they can use the Mx title on official documents, including your driving licence.

Diversity and Inclusion policies are also a handy indicator of an LGBT-friendly insurer or advisor. These are available on the website, or perhaps by request.

The 2 Types of Life Insurance for Gay Couples

Whole of life is just as it sounds. It provides an agreed level of cover payable upon the death of the policyholder to the named beneficiary.

Term life insurance is for a fixed period and is adjustable. You can take it as annual cover, for a five-year period, ten or twenty-year fixed period.

Term life insurance is best used for a fixed lump sum to cover all outstanding debts that you know of. The difficulty with it is knowing how much debt you’ll have when or if the policy is needed. And after the initial agreed time for the cover, such as five years, after that is up, you’ll need to renew and that will (usually) increase the cost.

The LGBTQ community is an active one. There’s a lot of change happening and a lot of support and campaigning to increase awareness of LGBTQ issues. Organisations that are actively campaigning for better rights and equality are often best placed to advise on financial matters concerning members of the community they represent.

Stonewall is among the largest LGBT groups in the UK. They operate globally and work with a number of partners. The group has a Global Diversity Champions Programme, which are businesses that are working with them to support diversity and inclusion in the workplace. This won’t apply to consumers, but those listed as members of Global Diversity Champions Programme, will be more understanding to the needs of the LGBT community, however, the list is from a workplace perspective and not from a consumer standpoint.

Some of the members include:

The full list of members can be viewed here.

Every insurance firm will be able to provide you with a life insurance policy that’s LGBT-friendly. There are rules they must abide by though, which relate to the questions they ask you. They can’t outright ask you if you’re gay, but they can ask if you’ve contracted any STDs in the past five years such as HIV, Hep B and Hep C, which can be indicative of being a high risk.

There are laws in place to protect you against financial discrimination, and there’s also an entire community with active and specialist insurance brokers on hand to advise on the right type of life insurance and offer impartial advice to help you decide the best LGBT-friendly life insurance product the market has to offer. Some are extremely customisable to cater to any variety of personal situations.

This website uses cookies to improve your experience. We'll assume you're ok with this, but you can opt-out if you wish. Cookie settings
ACCEPT
Read More

Any cookies that may not be particularly necessary for the website to function and is used specifically to collect user personal data via analytics, ads, other embedded contents are termed as non-necessary cookies. It is mandatory to procure user consent prior to running these cookies on your website.